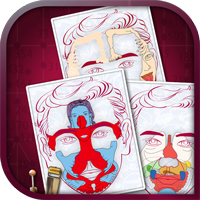 The diagrams of reflexion

The Dien Chan is Multireflexology because the point sets define a lot of reflection diagrams that are tie to different parts of the body and provide a lot of regulator effects.
For example, the ·point 87· that's in the middle of the chin reflects the feet and the bladder. Very effective to treat some muscular troubles, back pain and allergies.

The Dien Chan is a technique that refers to multiple therapeutic currents. We are also using the diagrams to stimulate the energy channels like the meridian of the traditional Chinese medicine. (TCM)
For example, the TCM shows us that anxieties are related to the energy of the spleen. In Dien Chan, we stimulate the spleen zone of the internal diagram to release its meridian.

The diagrams of reflection were drawn by Pr. Bùi Quôc Châu to represent the human body on the face.
Pr. Châu established at first the map of the 257 fixed points from which he deducts in 1984 the diagrams of reflection.
These charts are also based on symbolic and æsthetic concepts. For example, the diagram of Tai-Qi divides the face by following a curve which reminds the symbol of the yin and the yang. Really, the face is divided in two parts by the vertical median straight line that passes down on the nose. We notice that the effects of the stimulations of the right-hand side are yang when on the contrary those of the left-hand side are yin.
In the same way, the diagram of the extremities on the face represents the yang body with a red man on the stomach and the yin body as a blue woman on the back. In spite of these representations, we do not have to take into account the sex for our treatments.

In the history of the medicine, there is already a large number of therapies which lean on the principle of projection and look like Multireflexology - Dien Chan at first sight. Although based also on the reflexology principle, Dien Chan has a multi-directional character, while the classic projections have only a unique dimension on a plane surface.
To use correctly the multireflex tools we look for the most sensitive points or zones on the chosen diagram of reflection.
The in-depth study of the diagrams allows us to understand and memorize the fixed points of the Dien Chan map.
The multiplicity of the diagrams of reflection seems complicated, because often they overlap, but they articulate and complement between them. The diagrams of reflection establish the basis on which lean the particular theories of Dien Chan.

Clic here to discover all Dien Chan diagrams of reflexion!